While mascots don’t necessarily impact the outcome of a sports game, they provide teams with a form of identity and branding that likely no player can provide. The majority of teams in the four main sports leagues (NFL, NBA, MLB, and NHL) have mascots already, but 12 of them don’t. Surprisingly, or not, big-market teams like the Green Bay Packers and Los Angeles Dodgers find themselves mascot-less. But what if they weren’t?

Research lab OpenAI has made waves throughout Silicon Valley with their latest AI text generator, GPT-3. Leveraging this innovative technology, we took a stab at seeing whether AI could create mascots for different sports teams by prompting it to provide thorough descriptions of how these teams’ mascots should appear. These descriptions were then designed to realize what AI created. To judge these mascot designs, we asked the general public to provide their thoughts. Continue reading to see the AI-generated team mascots, and whether people thought they were valid or not. 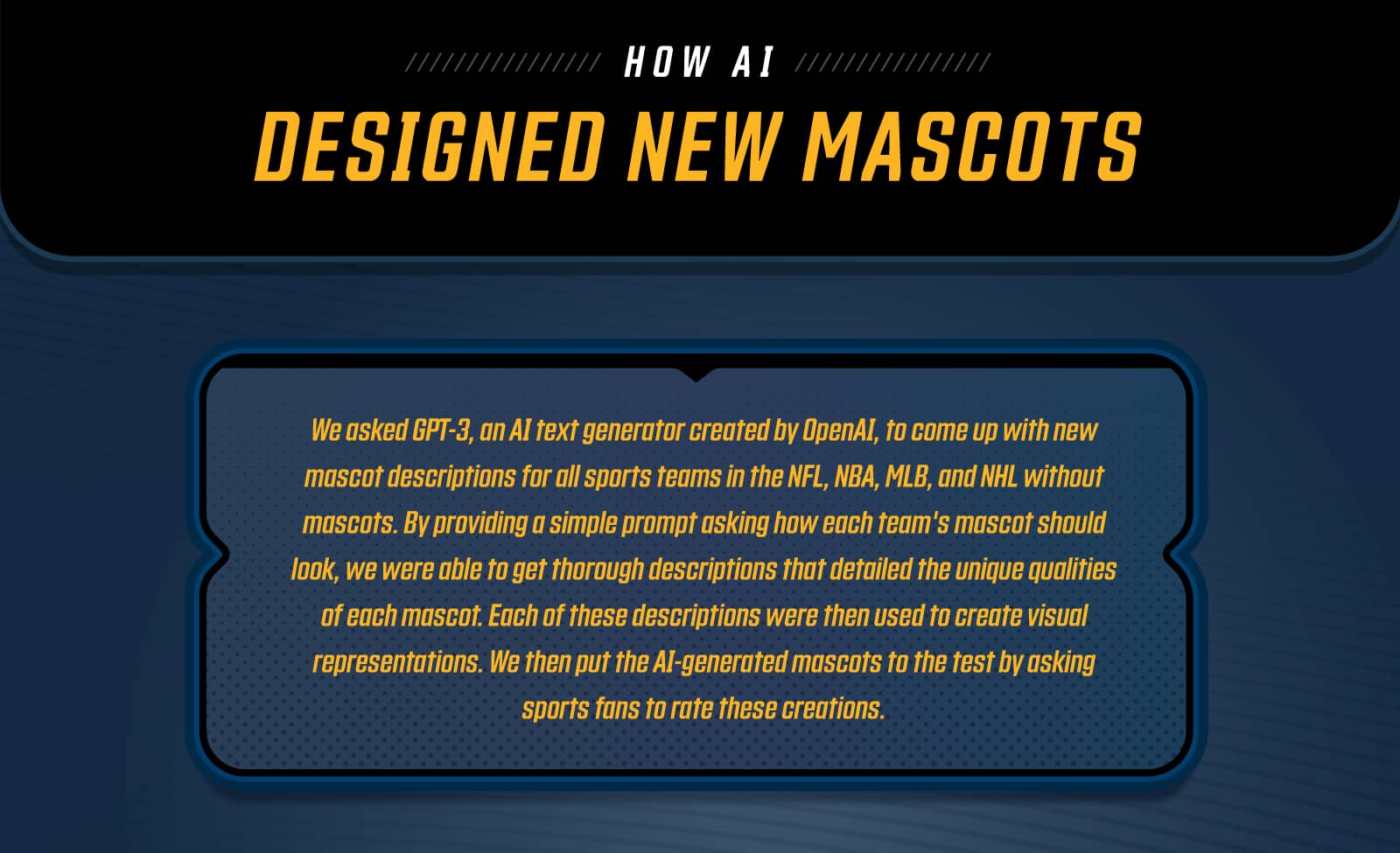 Generated for the Gridiron

Of the 32 NFL teams, four are without mascots: the Washington Football Team, the New York Giants, the Green Bay Packers, and the New York Jets. Let us see what AI came up with. 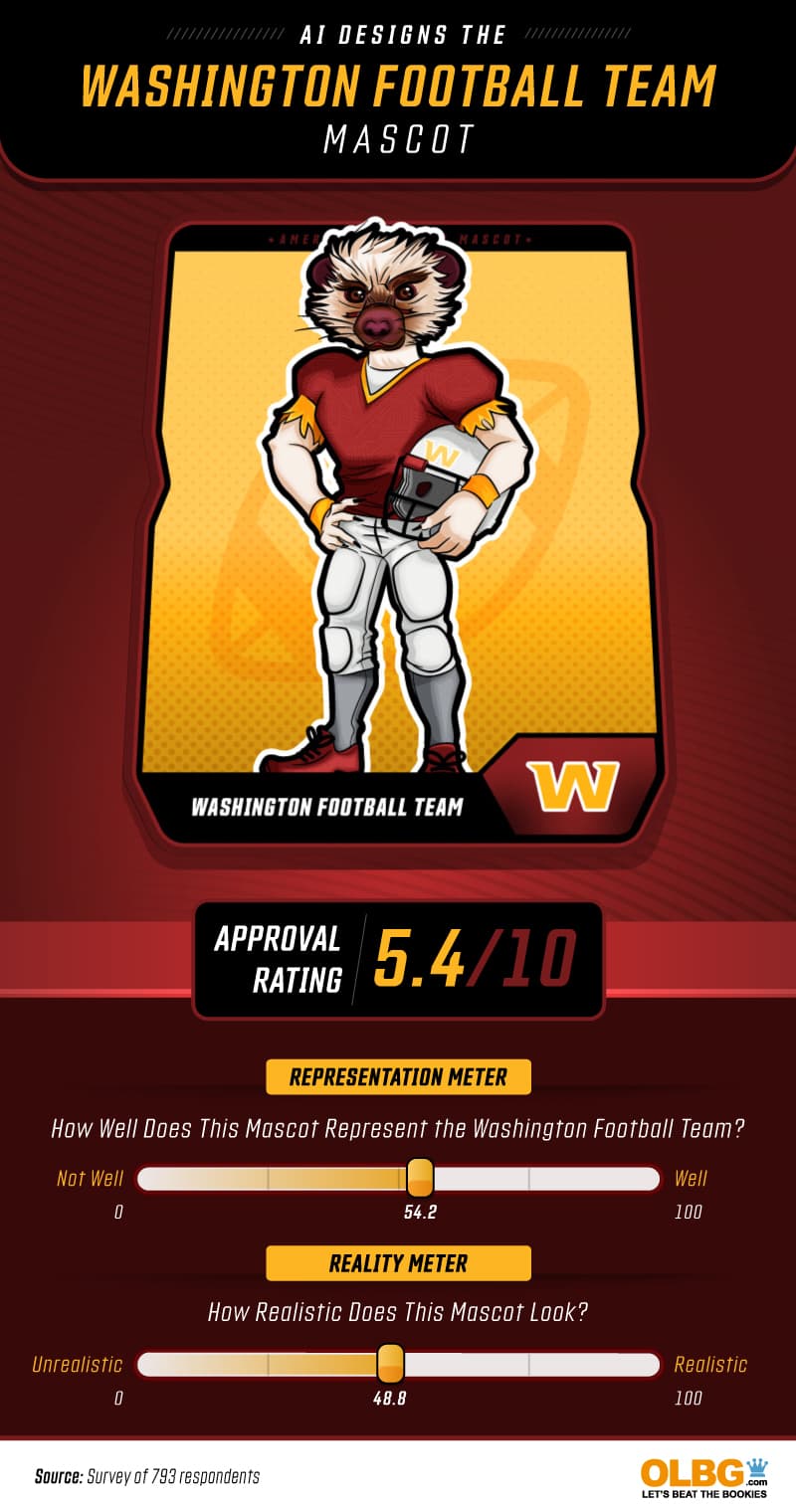 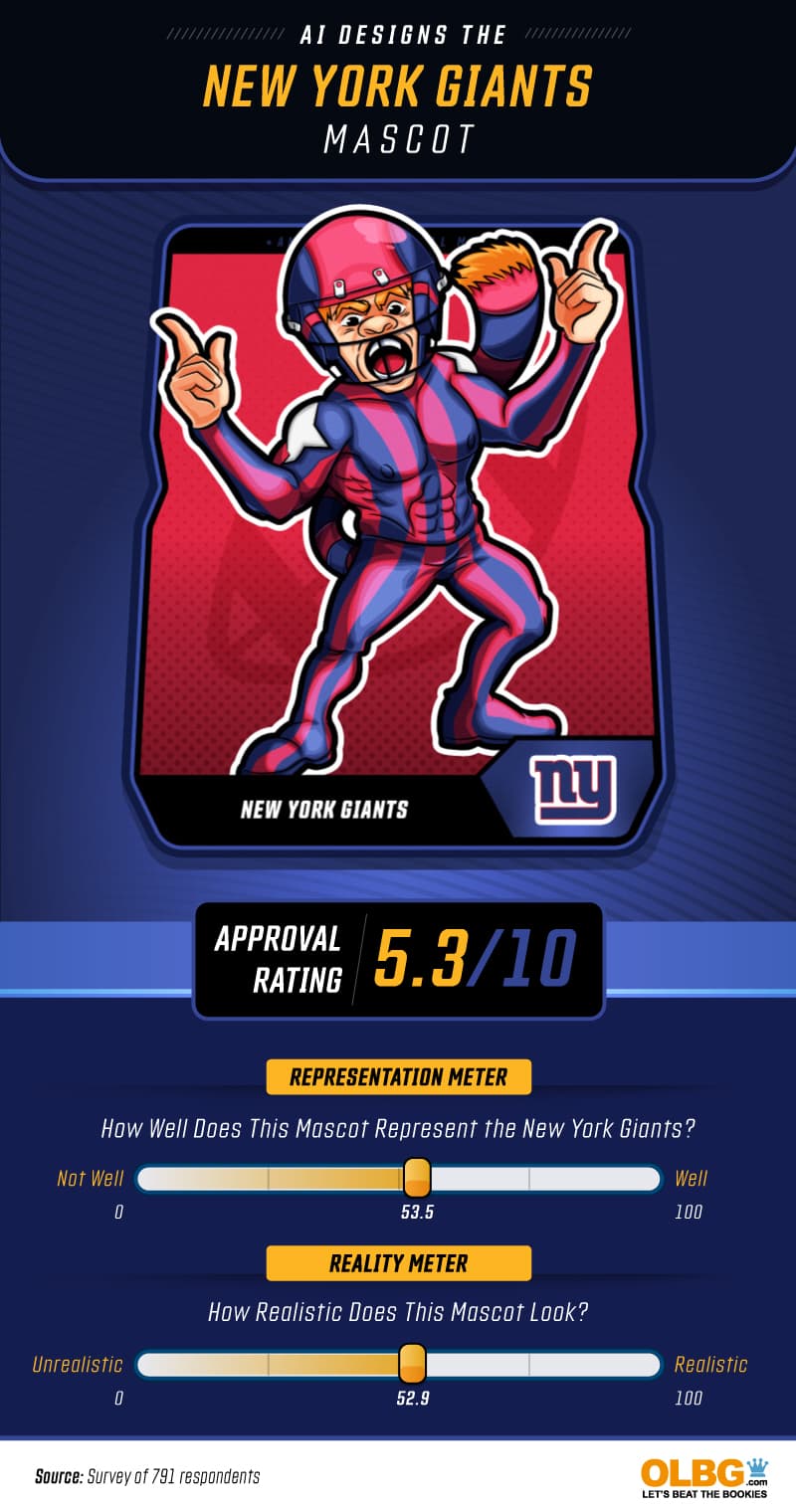 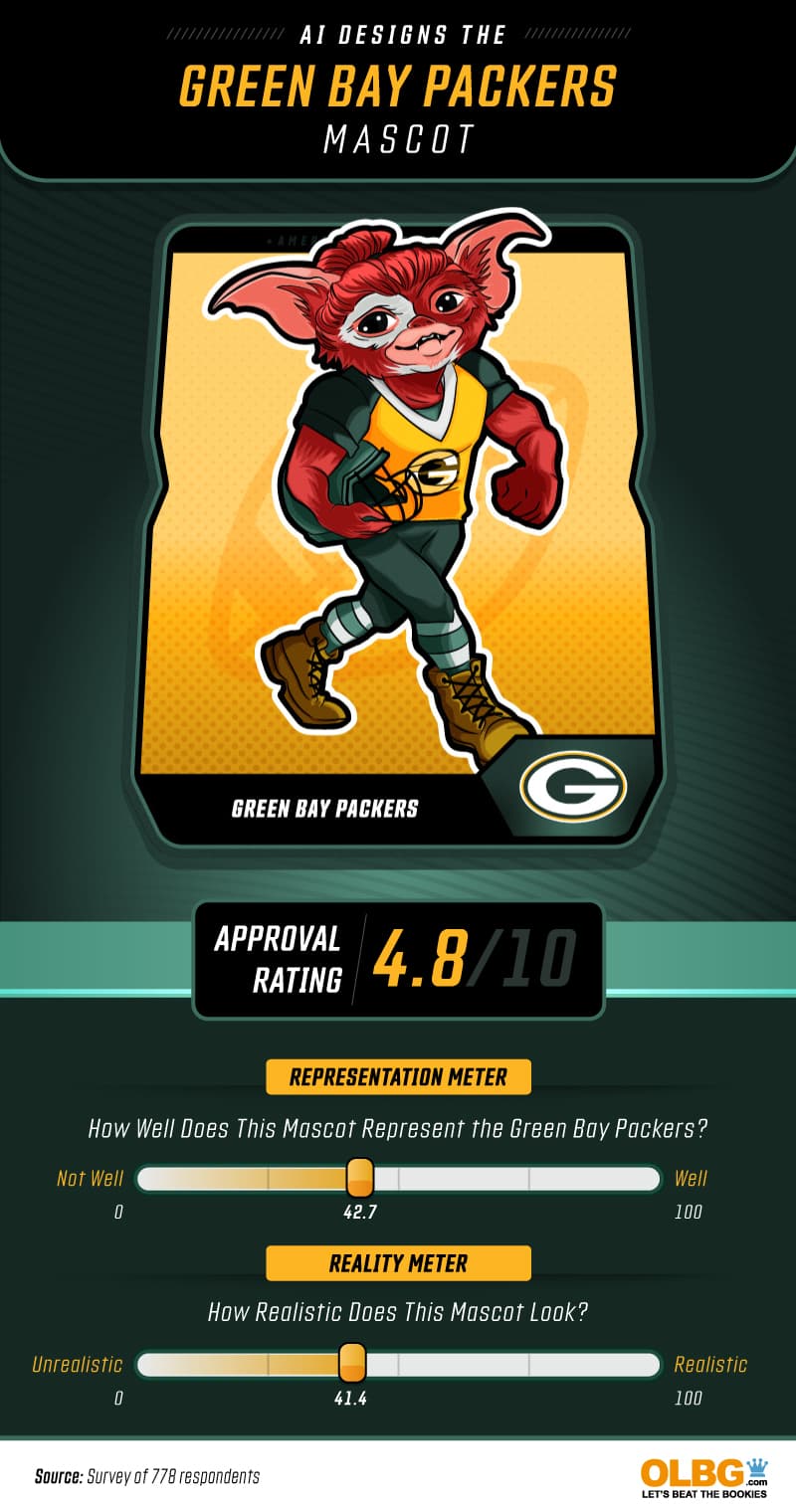 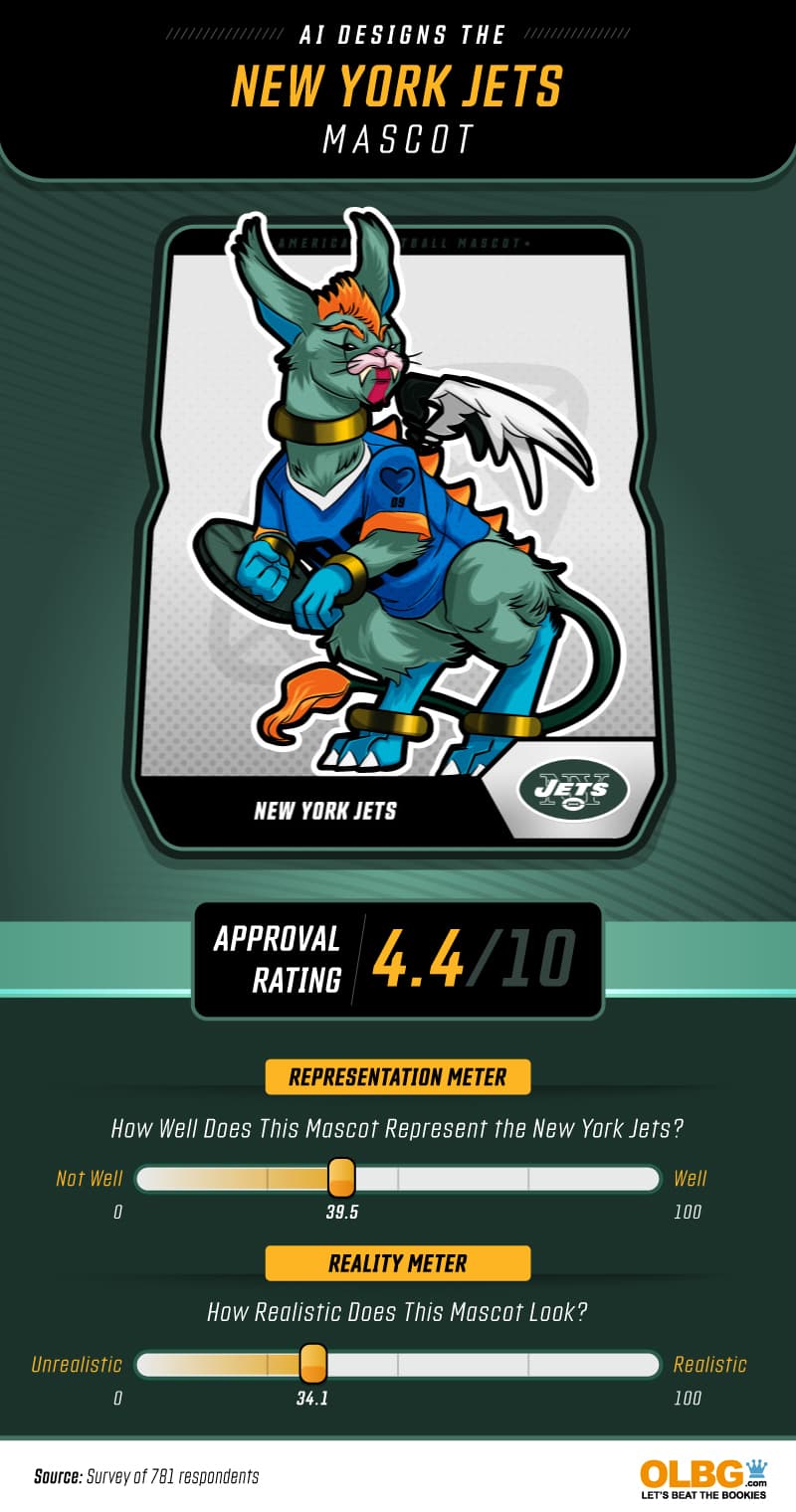 Of the four NFL mascots AI designed, respondents rated the Washington Football Team mascot the highest, with a score of 5.4 out of 10, and the New York Jets mascot the lowest, with a score of 4.4 out of 10. Respondents also felt the weasel-like mascot represented the Washington Football Team slightly better (54.2/100) than the New York Giants’ “macho” mascot (53.5/100) and much better than either the Mogwai for the Green Bay Packers (42.7/100) or the mythical creature for the New York Jets (39.5/100). Even though the Washington Football Team and New York Giants mascots were perceived to be more realistic than the two other mascots (48.8/100 and 52.9/100, respectively), respondents were not overly impressed with the realism of any of the AI-generated NFL mascots.


Created for the Court

Of the 30 NBA teams, four are without mascots: the Golden State Warriors, the Brooklyn Nets, the Los Angeles Lakers, and the New York Knicks. How did AI describe new mascots for these big-market teams? 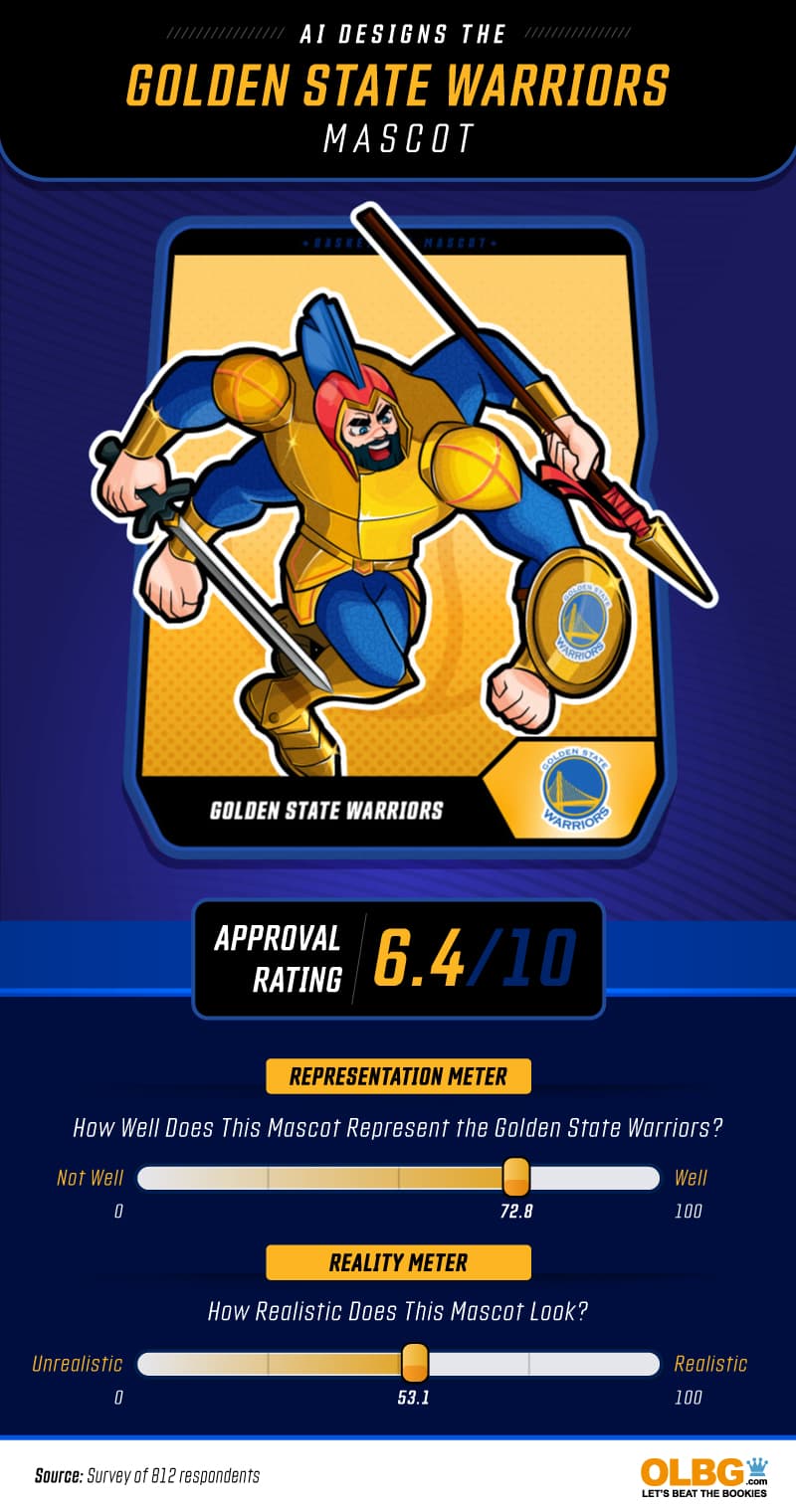 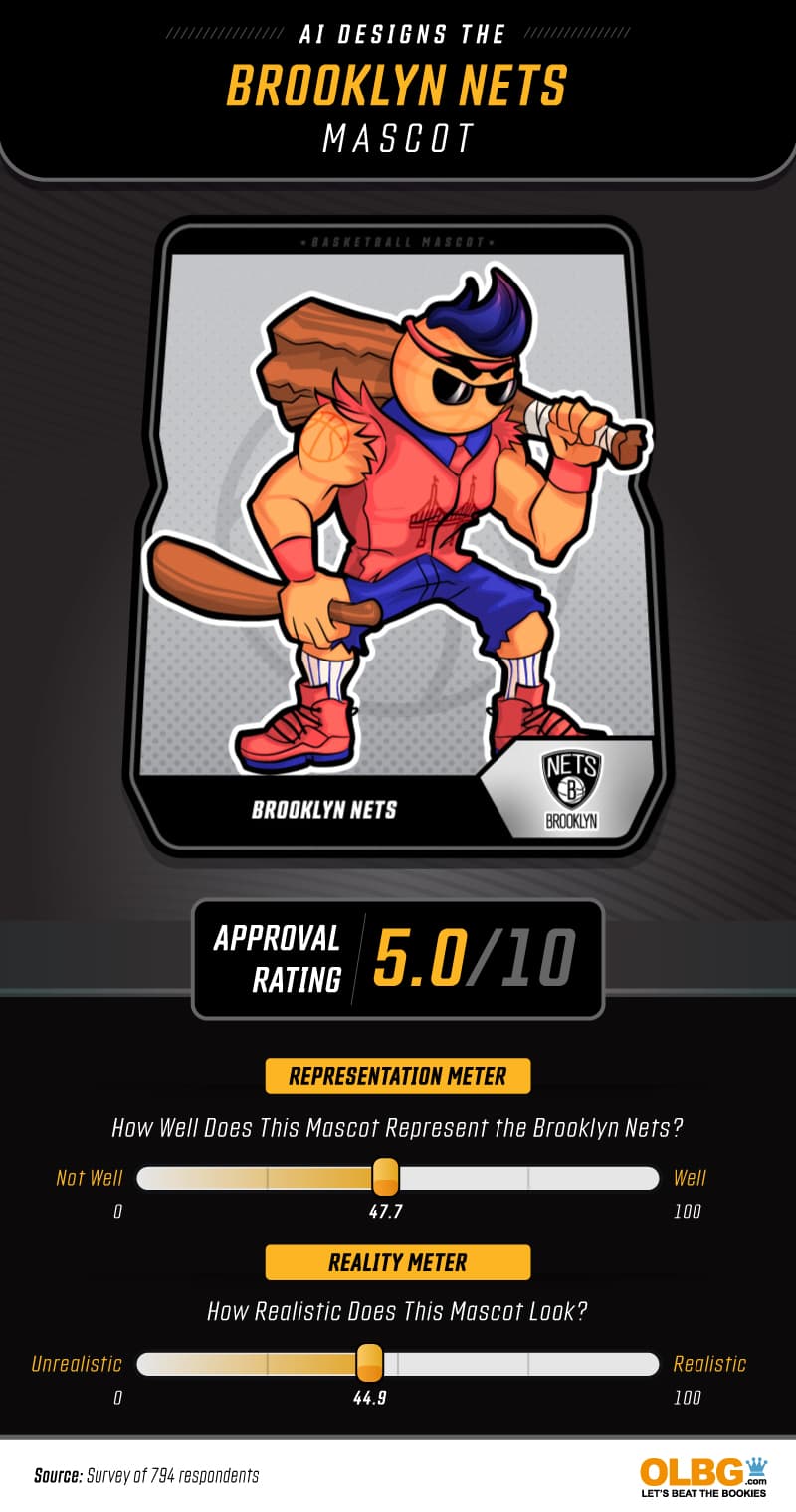 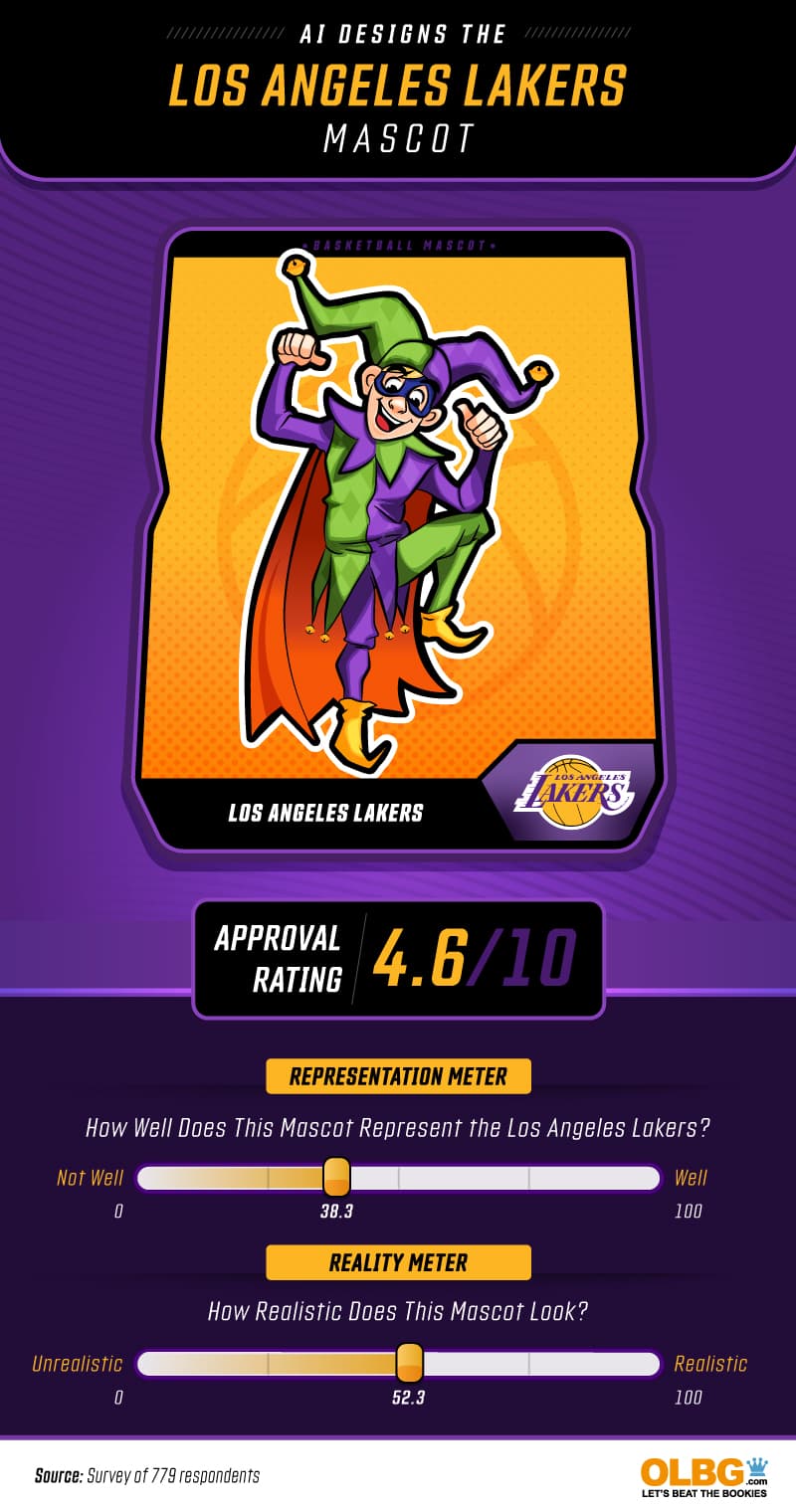 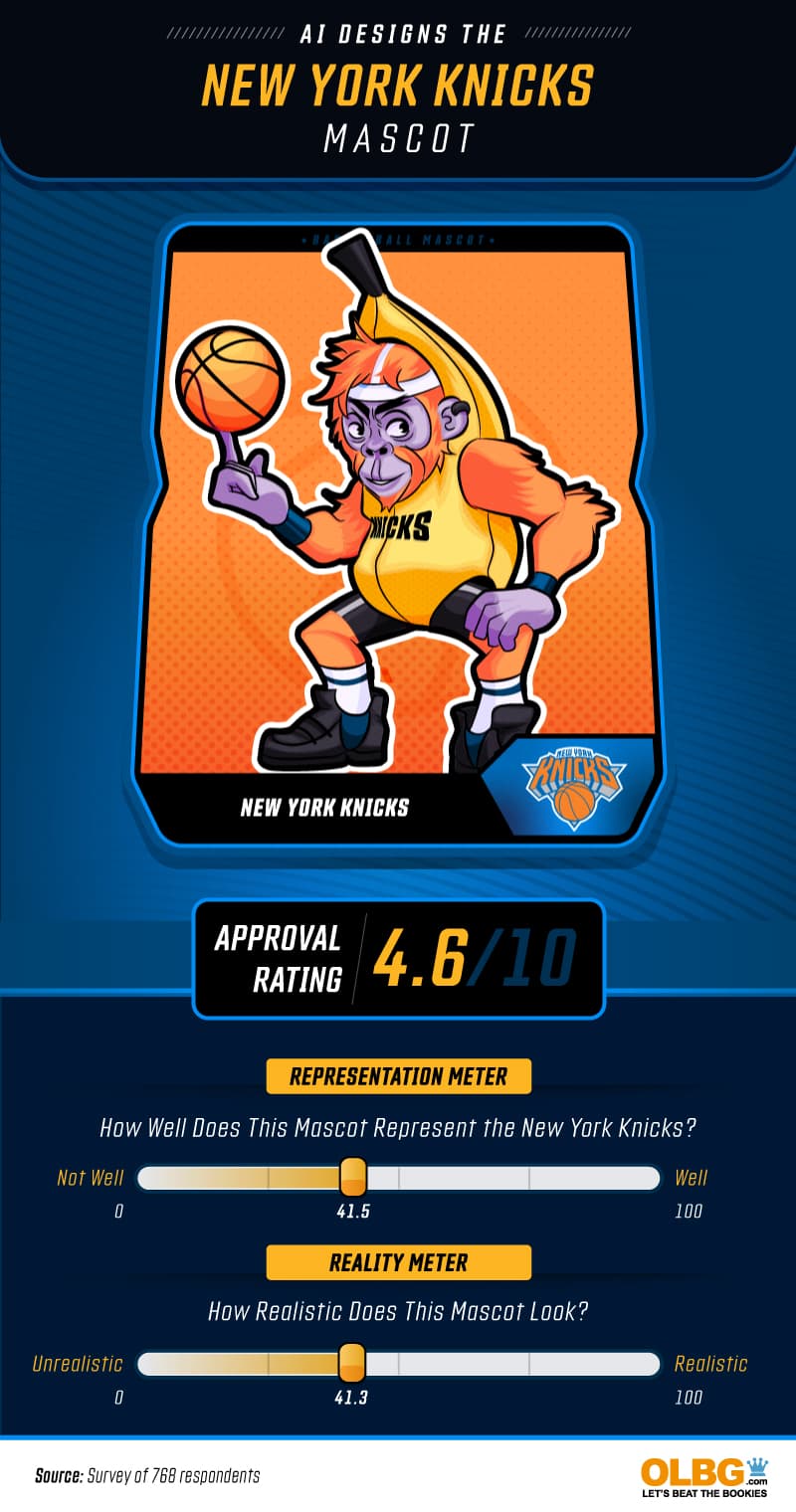 Made for the Mound

Of the 30 MLB teams, three are without mascots: the Los Angeles Angels, the New York Yankees, and the Los Angeles Dodgers. What did AI think of for these baseball franchises? 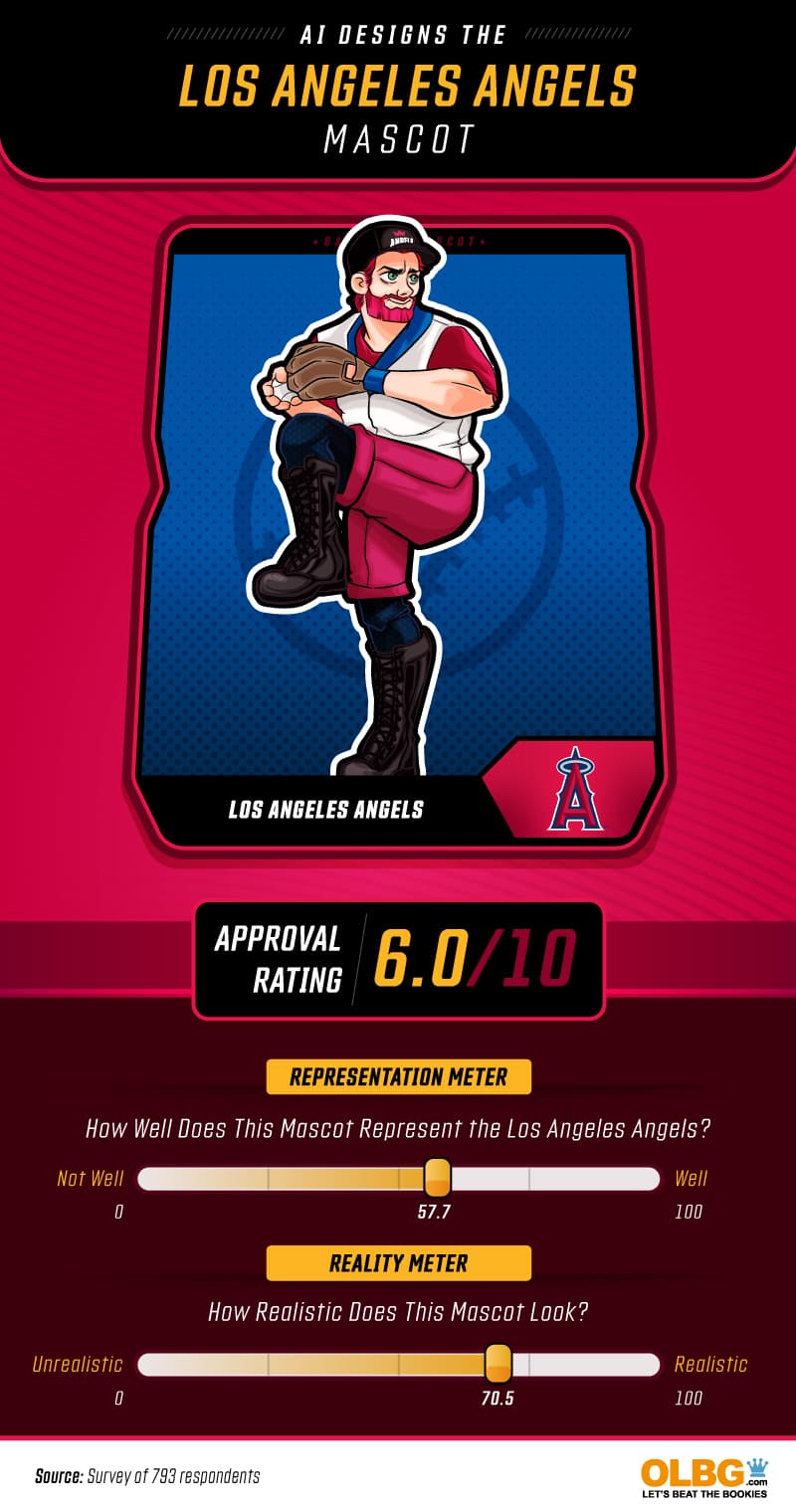 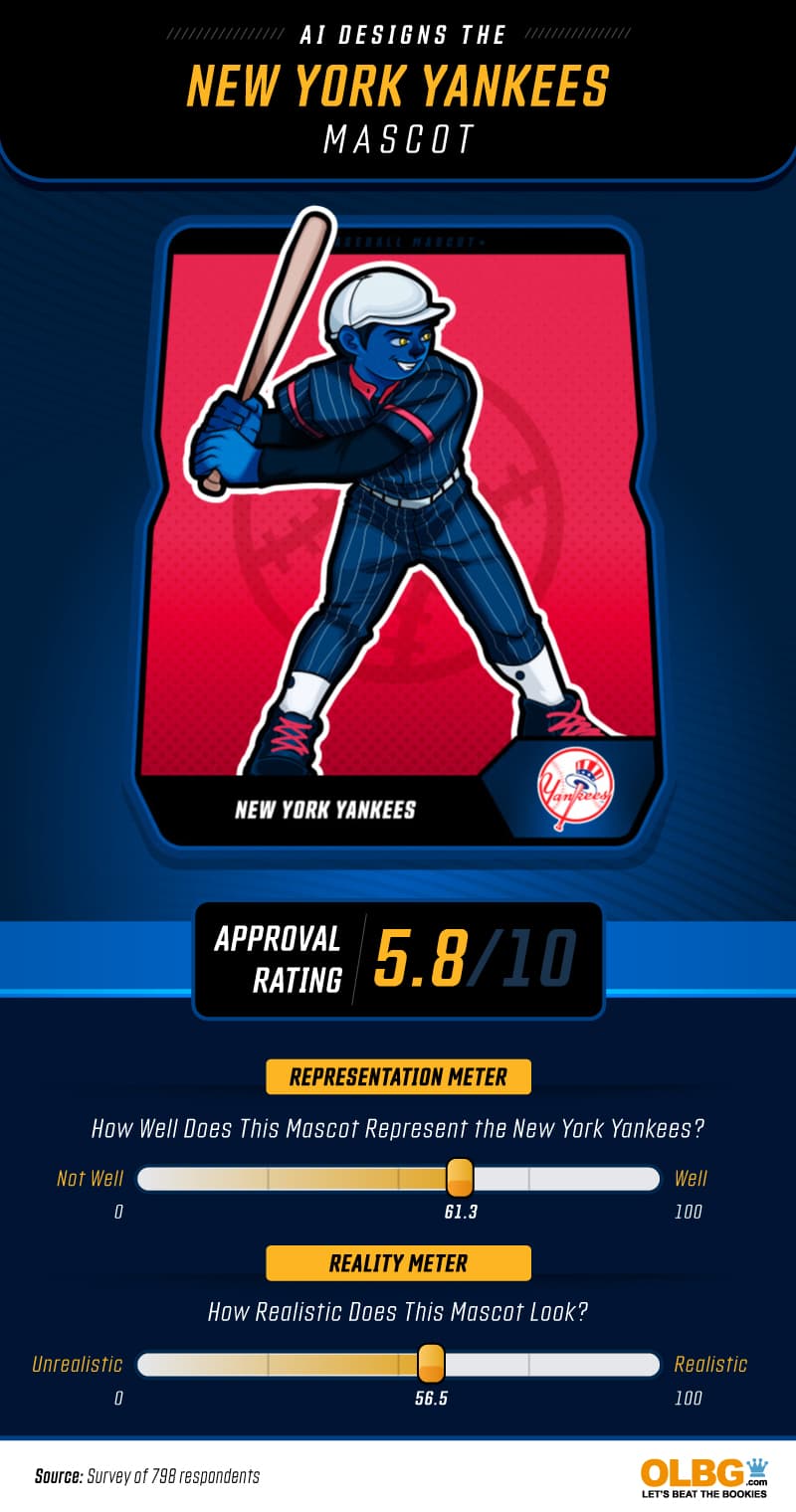 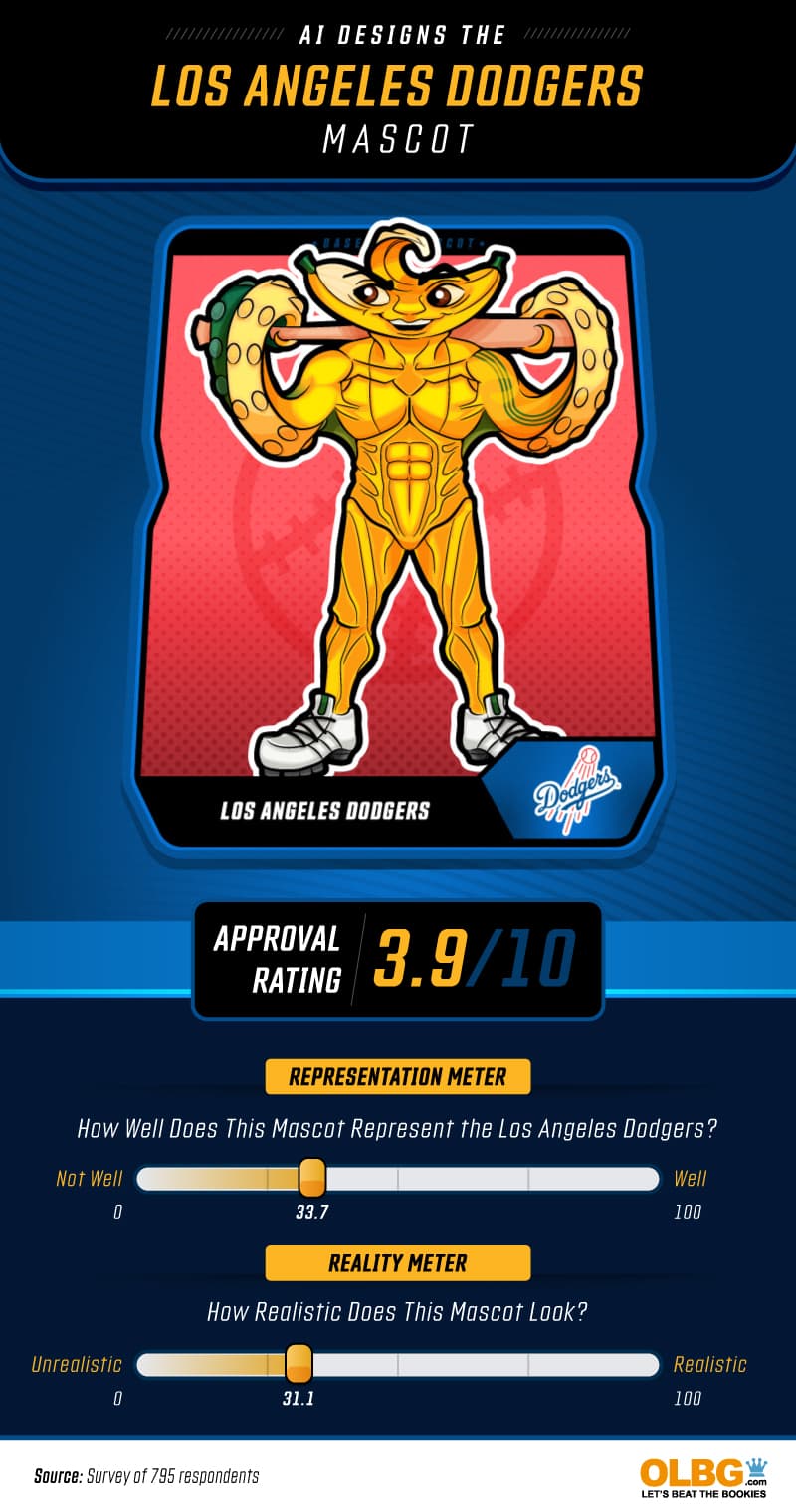 Of the 31 NHL teams, only the Seattle Kraken, a newly created franchise, is without a mascot. Not only did we ask AI to create the Kraken mascot, but we also wanted to see AI’s attempt to try and replace Gritty, the relatively new Philadelphia Flyers mascot. 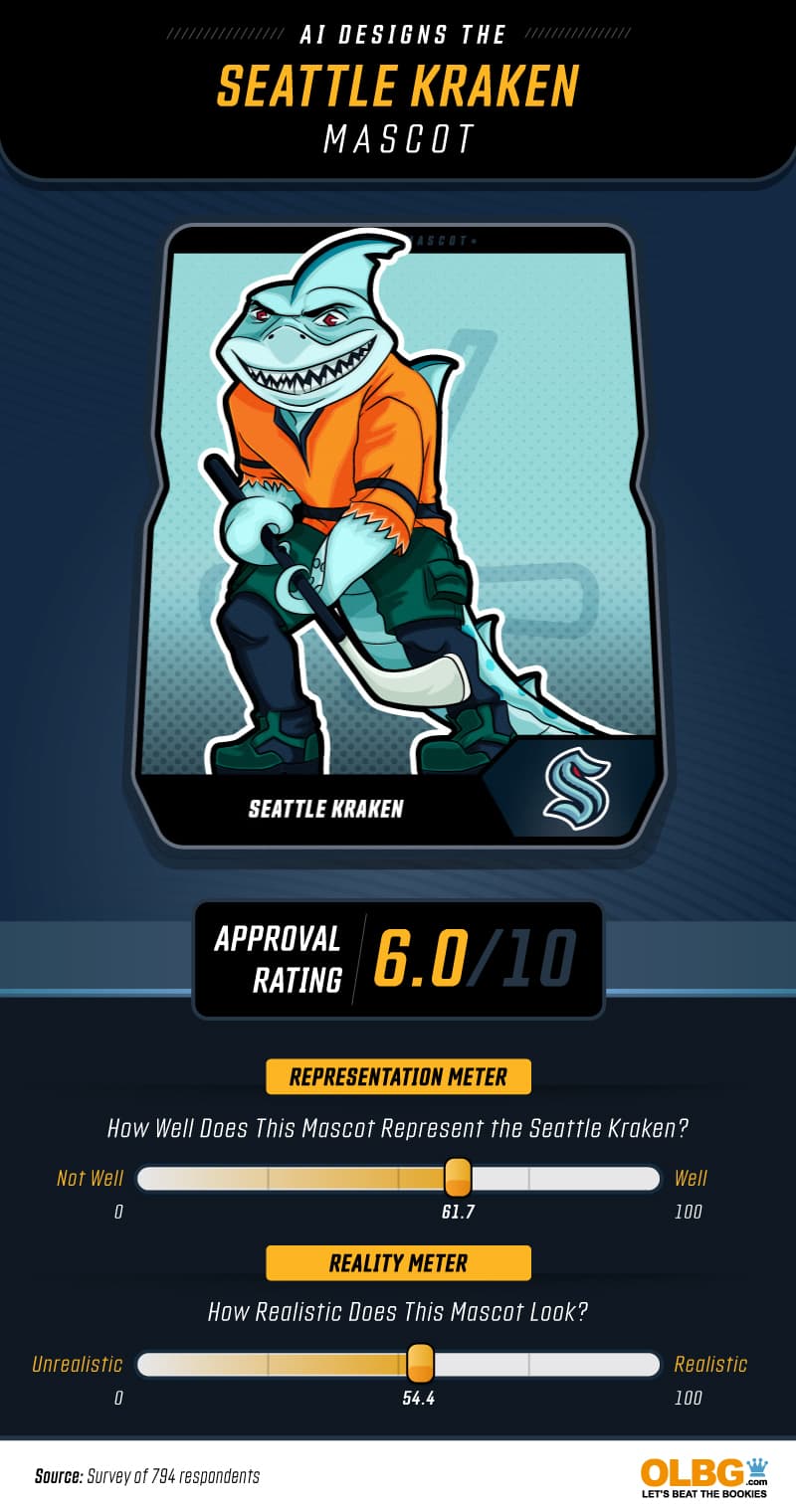 Respondents rated the dragon-tailed, shark-suited mascot for the Seattle Kraken a 6 out 10. They felt it represented the team name fairly well above average (61.7/100) and that it was slightly more realistic than otherwise (54.4/100). 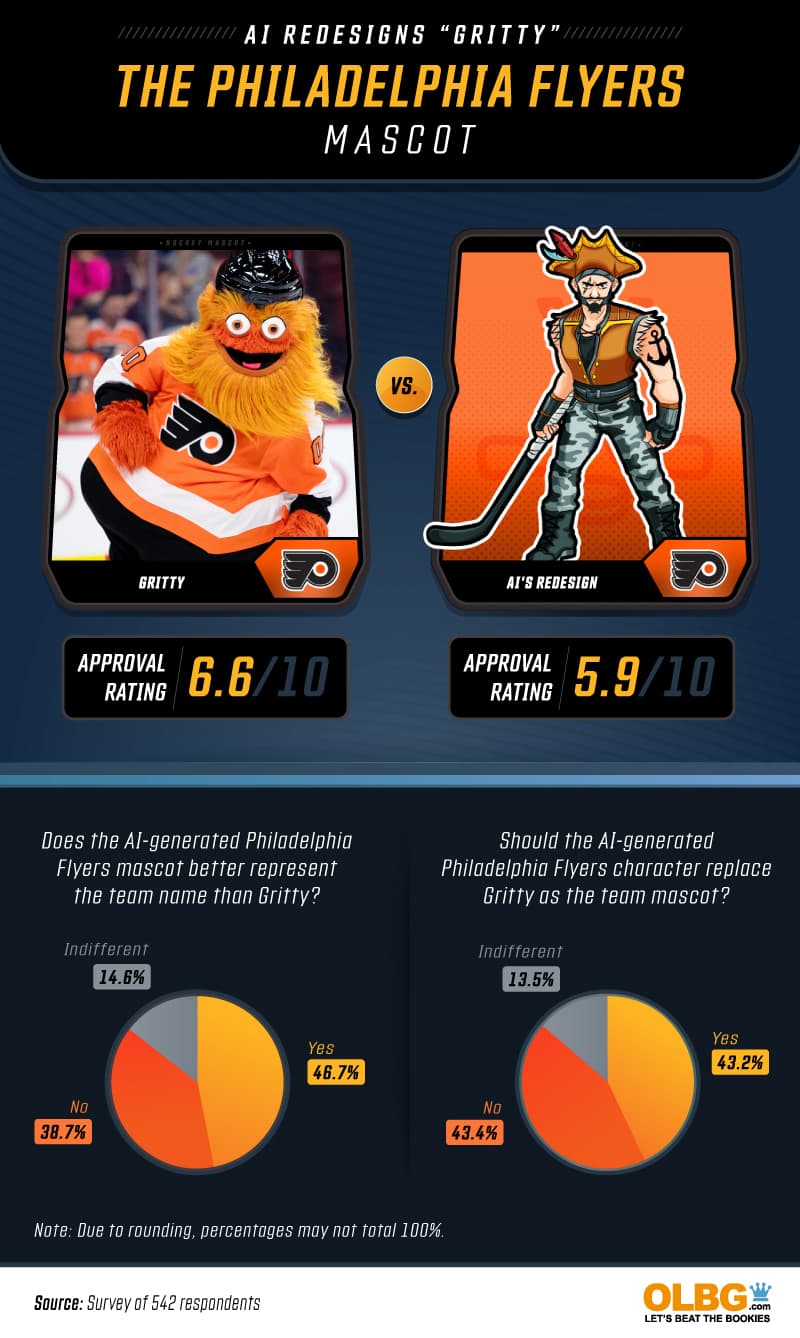 Do people feel Gritty should be replaced? At first glance, we see that respondents rated Gritty higher (6.6 out of 10) than the AI-generated pirate mascot (5.9 out of 10). However, when asked whether the mascot created by AI better represents the Philadelphia Flyers, 46.7% agreed, while 38.7% disagreed. Respondents’ split perception was confirmed when asked whether Gritty should be replaced with this new mascot, to which 43.4% were on the side of keeping the current mascot, and 43.2% were on the side of replacement.

Would AI-Designed Mascots Be Supported?

Clearly, people were quite conflicted about the AI-designed team mascots. Beyond the ratings of approval they gave to each mascot, the majority of people felt either indifferent or negative when asked how well these creations represented their respective teams and how realistic they were. It doesn’t seem like we will see a banana-octopus hybrid representing the Los Angeles Dodgers anytime soon.

Mascots are one of many ways to find enjoyment when watching sports. Their support is infectious, and maybe even brings teams some good fortune. If you ever want to test this luck or learn more about sports betting, there’s no better place to start your journey than at Online Betting Guide. To learn about the best bookies, tips, and betting strategies the internet has to offer, head over to olbg.com now to become a sports betting aficionado.

AI’s creativity in designing team mascots is truly something else. If you know of anyone who may enjoy seeing these hypothetical mascots, feel free to share this article with them. We just ask that you do so for noncommercial use only and to provide a link back to the original page so contributors can earn credit for their work.