Which Premier League teams have the most supportive online fans

For many of us, the sports team we support is an integral part of our identity, often supported by our parents, family members, friends and loved ones. Sports teams create communities of people who come together to share their passion for the sport and the camaraderie of sharing the highs and lows of victory and defeat.

However, not all fandoms are created equal. While the largest and most successful teams often generate the most public interest, which in turn can translate into a larger community of fans, they aren’t necessarily the most enthusiastic or committed groups. Smaller teams often benefit from having close ties to their local community, hiring local talent and hosting community events.

We at OLBG decided to find out which Premier League teams from the 2021/22 season have the happiest fans based on their social media activity. So, which team will come out on top, and where will your favourite team place in our rankings?

The Premier League teams with the most loving fans

Here we can see the Premier League teams ranked by their overall social engagement score. This score was calculated using the average likes received per post by each club’s Twitter and Instagram account, as well as the ratio of “love” reactions to “angry” reactions on articles about the team. Unfortunately, we could not obtain complete data for Brighton & Hove Albion, so they have not been included in this ranking. 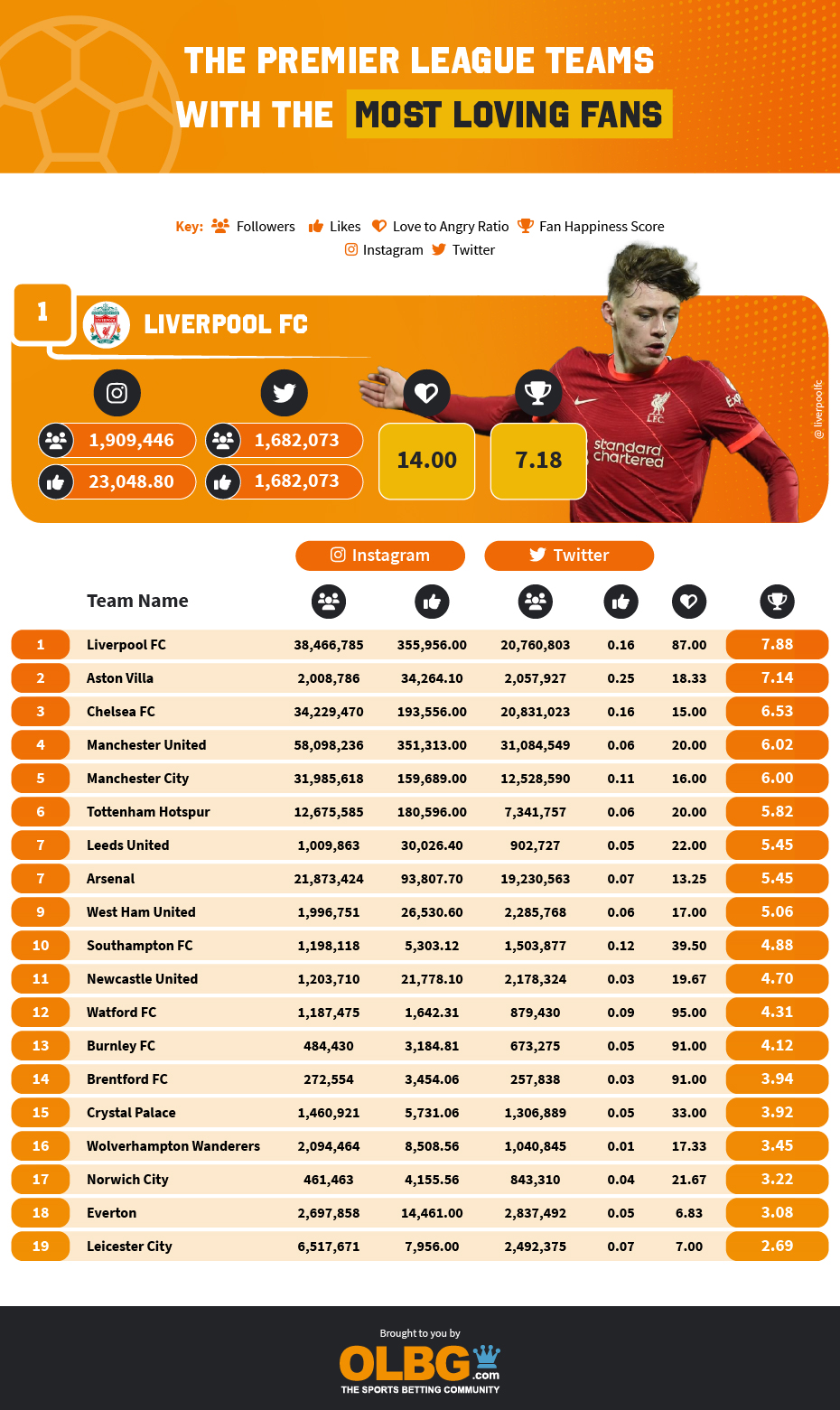 Liverpool has the happiest fans in the Premier League with an overall fan happiness score of 7.88. As one of the top teams in the league, Liverpool has a huge fan base with supporters all around the world, who also appear to be happy with their chosen team. Liverpool scored well across the board, with a very high average number of likes per post on both Instagram and Twitter, as well as receiving a high ratio of “love” reactions compared to “anger reactions” on articles that discuss them.

Despite having far fewer average likes per post than any team in the top 6, Aston Villa managed to place second with a fan happiness score of 7.14. Villa performed particularly well on Twitter, which is known for its very low engagement rates, with the team receiving 0.25 likes per post on average. While this may sound low, it’s actually the highest score in the league by quite some distance.

In third place, with a fan happiness score of 6.53, is Chelsea FC. Chelsea had strong performances for the number of average likes on both Instagram and Twitter but was let down by one of the worst ratios of “love” to “angry” reactions on posts about the team.

We wanted to find out which Premier League teams from the 2021/22 season have the happiest fans. To do this, we looked at the average likes received by the team on their Twitter and Instagram accounts, as well as taking the ratio of “love” reactions to “angry” reactions on content published about them on Facebook from BuzzSumo.

We then combined these three factors into a single score to allow us to compare the overall happiness of each team’s fans.

We have a whole range of statistical articles that may interest you, either browse the blog section or use one of the handy links below

Feb 07, 11:49am
By using this site you confirm you are 18+ and consent to our use of cookies and processing of personal data as set out in our Privacy Policy
Got it!