First Premier League Manager to Leave Odds: Erik Ten Hag NOW ONLY 13/2 from 33/1 to be the first manager to go this season!

The Dutch manager has taken United to the bottom of the Premier League table for the first time in 30 years and bookmakers have slashed his odds to go due to this. 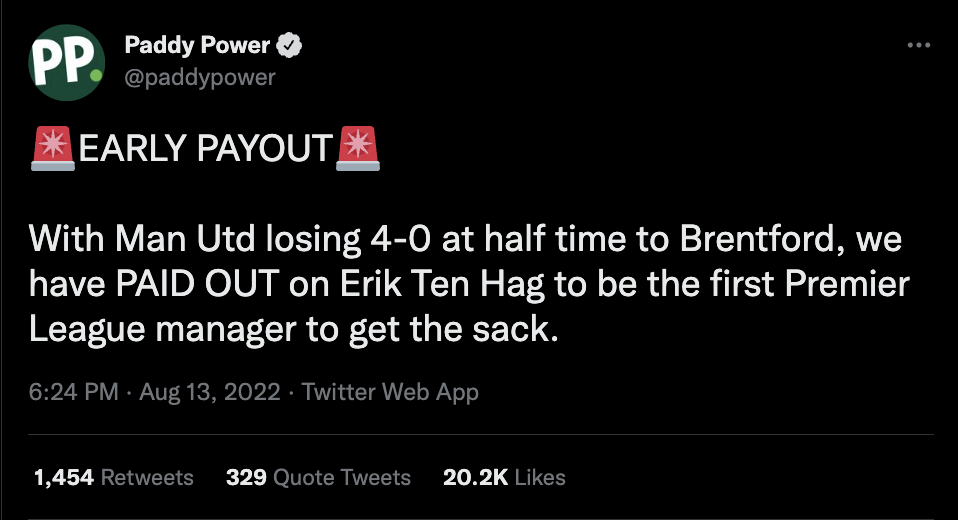 Bookmaker Paddy Power paid out on bets for Erik Ten Hag to be sacked at HALF TIME of their 4-0 loss to Brentford at the weekend.

Paddy Power now make Ten Hag the third favourite to leave first this season and a big loss to Liverpool next week may hurt his job security.

Steven Gerrard was the big market mover last week, coming into 8/1 from 20/1 to be the first manager to leave this season.

The Aston Villa manager has since drifted slightly after his team's 2-1 win over Everton at the weekend.

Erik Ten Hag is now into 13/2 to be the first manager to leave from 33/1 after Manchester United's horrendous start to the season sees them BOTTOM OF THE LEAGUE!

Ralph Hassenhuttl remains the outright favourite to be the first manager to leave at 2/1 after his side drew against Leeds at the weekend.

The Southampton manager has consistently been rumoured to be under pressure in his role at the Saints and that may continue this season.

Back in February earlier this year, Hassenhuttl hinted at his retirement from football once he leaves his role at Southampton.

Fans will take confidence in how Southampton came back from 2-0 down to draw against Leeds though.

Everton's start to the season has been miserable with two defeats in their first two games.

The club desperately need a striker with Dominic Calvert-Lewin's injury causing havoc to their early season so far.

Bookies make Lampard 10/3 to be the first manager to leave and further defeats may cause the Everton board to take action.

Frank Lampard is 10/3 to leave first with Everton losing their first two games of the season. The club seems desperate to sign a striker after Dom Calvert-Lewin's injury.

Jul 25, 11:33am
By using this site you confirm you are 18+ and consent to our use of cookies and processing of personal data as set out in our Privacy Policy
Got it!